The Surry Village School opened on December 19, 1872. Herbert Tilden of Lewiston was the first teacher. Considered modern for its day, it was built by Jesse M. Ray for $2000.00, and it sported an attached three hole air conditioned toilet. However, because there was no running water, a big water bucket, accompanied by a tin cup, soothed the pupils’ throats. By the 1920s a water cooler with a spigot assured the school remained modern and pupils fashioned water cups out of half sheets of arithmetic paper. In 1931, the school got electricity and stove jackets were placed in each room, and in 1940, chemical toilets were installed.
Until 1926 this building was used as a high school, but after this, Surry students chose to go to Ellsworth High School, where they performed very well. This was especially true in the early 1940s as evidenced by the following records of Surry students: 1940 Sylvia Whitney, Valedictorian;1942, George Staten, Valedictorian; 1943, Helen Carter, Salutatorian. Then in 1944 Surry took it all with Charlotte Ingalls, Valedictorian and Lorado Carter as Salutatorian. Later, Wilbur A. Saunders was Salutatorian in 1951.

In the 1930s and until the school closed in 1952 the first four grades were located on the first floor; the second floor contained grades five through eight.
In 1937, formal music instruction began and students learned contra dancing and how to foxtrot and waltz.
In 1941 ninth grade was eliminated while the school year was increased from 32 to 36 weeks. This was partly due to town road improvements, which eliminated the need to close school for up to five weeks during “mud” season.
Until 1939 the only reference book in the school was a Lincoln Library book, which was shared by the students. Then in 1939 a regional track meeting was held in Ellsworth. Surry’s top female athletes were Loretta Lessard and Grace McCabe. Kenneth Moon and Mark Young were the top male athletes. Surry won that event and with it a full set of encyclopedias.

A school nurse, Miss Dunphy, came around periodically during the 1930s and 1940s, checking the general health and welfare of Surry’s children. A filing by the nurse in the 1932 Town Report listed 64 of the 65 students defective, a description that could signify anything from dirty fingernails to lice. No record remains listing the name of that one perfect child.
Hopscotch and London Bridges, marbles and ball games filled the play area adjacent to the school at recess time. One memorable event occurred when Phillip Soderquist, a teacher, applied a good right hook to a young tough from picking on smaller kids on the playground. He knocked the boy out. Both parents and other students responded positively to this action.

Toddy Pond School closed in 1932, which meant all Surry students now attended the village school. The school deteriorated badly in the 1940s, and finally, after the chemical toilets froze up and other maintenance problems occurred, the school was closed in the spring of 1952. 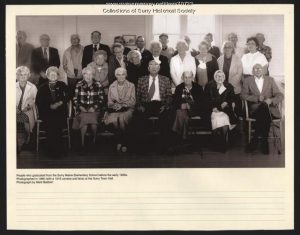